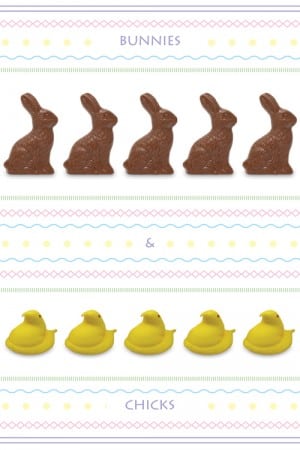 Maybe pink also, but most def­i­nite­ly not blue, orange, green and pur­ple as they are today. And there were only the crea­tures that “peep,” you know, lit­tle chick­ies. No oth­er sounds like rab­bits and what­ev­er else the Peeps fac­to­ry is churn­ing out. Prob­a­bly even real human Peeps someday. 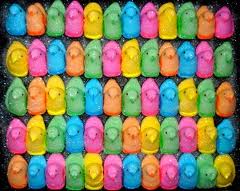 There’s even Peeps plush, Peeps appar­el and all sorts of Peeps collectibles. 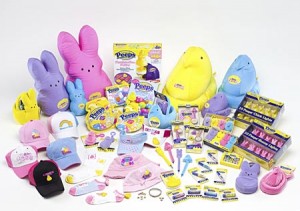 And can you believe it? There’s even a Peeps store. 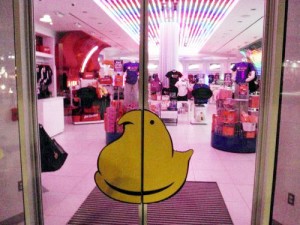 I’d say Peeps are to East­er what Rudolph is to Christ­mas — not the main attrac­tion (com­mer­cial­ly speak­ing) but very, very important.

And the poor choco­late East­er bun­ny? Just the butt (no pun intend­ed) of a joke. 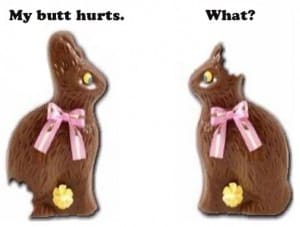 If I could­n’t find every sin­gle egg and fill my bas­ket to over­flow­ing I would scream and yell and cry until some­one would sneak up behind me and mag­i­cal­ly fill it with eggs, jel­ly beans and of course Peeps.

Hope you have a very hap­py East­er. After all, I won’t be there to throw a tantrum and ruin it.

Are you an ampersand fan? Join us here & now!

USE FOR CATEGORIES HEADING

AmperArt posters may be distributed freely both electronically and in print form, for they are intended to be enjoyed by everyone (especially ampersand fans). Please keep the entire poster intact, however, with all logos and text appearing in its original form under the main image. AmperArt is a trademark of Desimone Design. Images and text, on posters and within this site, copyright by Chaz DeSimone. All rights reserved.

Chaz releases a new AmperArt print every month. For Chaz it's fun & for you it's FREE.

He also writes a relevant story & production notes about the artwork & provides a hi-rez download suitable for gallery-quality printing & framing.